Learn more on the topic from the extensive summary of a nationwide study by Alan Train’s:

This study was performed and summarised by Alan Train and his staff in the House of English / Clever Kids in the region Hof-Hochfranken between 2009 and 2014. With courtesy of Alan Train we present here the summarized results. 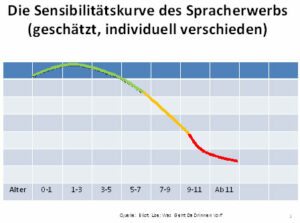 Children are linguistic geniuses … but only for a short time!

The graph above shows us that children aged 0 to 5 years are susceptible to learn a new language at a rate never to be repeated in life.

Language is solely the most important tool of the people in the struggle for survival in this world. Nature has therefore ensured that the child is equipped with the great capabilities in the brain during the first 5 years of life to cope to a large extent with this task.

This not only works with one language. Acquiring two or more languages at the same time is possible and not uncommon in today’s world.

1. The desired effect of the early encounter with English

The desired effect is not to learn vocabulary and grammar rules. It consists rather in an attitude to language and to themselves, which means that our children:

2. Why are children able to learn languages so well? What’s going on in the brain?

The structure of the brain and language acquisition

Movie: the neurons and their connections to each other

The four judgments or underlying investments in the brain of the child:

Movie: word representations in the brain

The English Play group – English for our 2 year old child?

At the age of 5 years old the curve of the sensitive period starts to fall and the ability for learning a language via play in this form is decreasing.

Only once in a lifetime every child has this sensitive period and it can be used.

How does it work?

At the age of 2 years the child’s brain is fully equipped with all the cognitive skills that it requires to acquire language, and is able to do so lightning-fast. The evolution willed it that way, because language is a matter of survival. Under the right set of conditions children can grow up with two, three or even four languages.

Our expectations: What can you expect from the English play group?

Help us to keep the door for languages far open for your child for a lifetime.

What are the benefits for our child in later life?

English is becoming increasingly important for work and private life.

English is a key skill in an increasing number of professions. The small investment today and the permanent encounter with language in the early years ensures that your child experiences a lifelong a different relationship to language than you have probably experienced yourself.

We are happy to work together with you, to keep the door for languages far open for your child a lifelong.

We look forward to you

error: Content is protected !!
We use cookies to ensure that we give you the best experience on our website. If you continue to use this site we will assume that you are happy with it.Ok